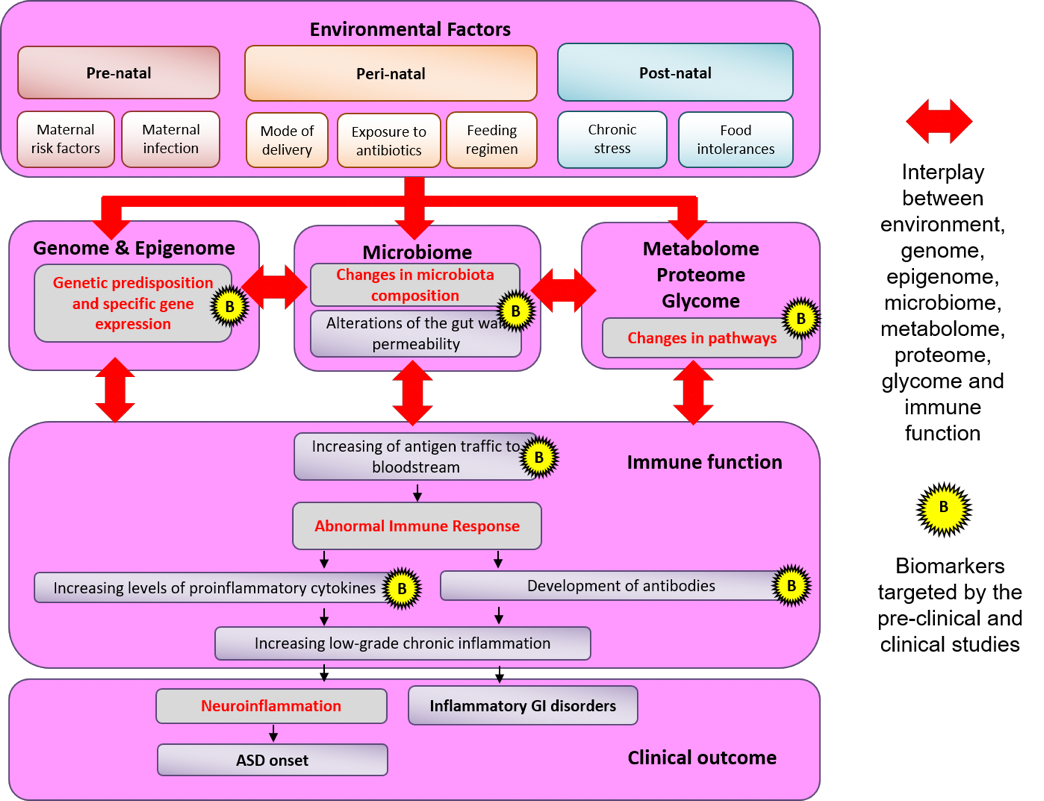 State of the art

The rates of autism has increased in the last decades reaching the prevalence of 1 in 59 children around the world (source: ADDM Network, www.cdc.gov/ncbddd/autism/addm.html ) with a strong sex bias (male:female=4:1). This pandemic is only partially attributable to extrinsic factors such as improved awareness and recognition and changes in clinical practice or service availability [1]. Thus, other environmental factors are likely at play to explain this pandemic. Based on the gene/environment interaction theory, several therapeutic approaches have been proposed with conflicting results [2][3][4] probably due to a multifactorial cause of autism and that autism is a final pathological destination that can be reached through different pathways. Therefore, it is imperative to understand the autism population based on the identification of specific biomarkers that can assist in personalizing interventions for the most effective therapeutic results. Tackling this major public health issue requires urgent action and the formation of interdisciplinary consortia in order to further our understanding of autism and its possible treatment of autism-related symptoms. Many individuals with autism suffer from associated co-morbidities, including seizures, sleep problems, metabolic conditions, and gastrointestinal (GI) disorders, which have significant health, developmental, social, and educational impacts. The neuroanatomical and biochemical characteristics that have been associated with autism pathogenesis [5][6][7] involve mechanisms that are direct consequences of the effects of low-grade, feverless, systemic inflammatory events [8][9] while the protective mechanisms against autism pathogenesis have strong anti- inflammatory components [10]. The gut microbiome drives immunoregulation (in particular during the 1000 days of life) and dysregulated immunoregulation [11] as well as inflammation predispose to autism, while psychological stress drives further inflammation via pathways that involve the gut microbiome [12][13]. Children with autism experience four times more GI symptoms than control groups and GI symptoms may identify a unique subgroup of children with autism [14]. Aberrant immune system activation and alterations in gut microbial composition that correlate with autism-related symptoms have also been suggested [15]. Finally, a link between gut microbiome and immune function in autism has been reported [16] as well as improvement of both GI and autism-related symptoms in autism subjects in which the gut dysbiosis was corrected by microbiota transfer therapy [17].

The scope of this project is to use high quality microbiome, metabolome, and other -omics data produced by large-scale international initiatives to link microbiome composition and function with specific disease for personalized prediction, prevention, and treatment of disease. Unfortunately, current large-scale datasets in autism are mostly cross-sectional studies (cases vs controls) that do not allow the mechanistic link between microbiome composition/function with disease onset. Rather, prospective studies following infants who have a family history of autism from birth to identify potential biomarkers predictor of autism development followed by validation on large multi-omic datasets are necessary in order to achieve this goal. The 3 patient recruitment centres will allow a global sampling based on their geographical coverage (2 European centres (Ireland and Italy) and MGH, a United States of America (US) partner) and their broad network covering over 9,500 families with children with autism, which will facilitate the recruitment of ~600 infants that have a family history of autism (new-borns in families already with a child with autism). This is in line with the call’s recommendation to expand on current data in order to achieve the overall goal of this funding initiative. Therefore, the GEMMA consortia team has been designed with this approach in mind, in order to explore:

If proven correct, these hypotheses support the possibility that early identification and stratification of vulnerable patients through the exploitation of gut microbiome composition/function mechanistically associated with disease pathogenesis could translate in personalized targeted interventions prevent the onset of GI conditions and pave the way for earlier intervention for autism and treatment for autism-related symptoms.

Since microbiome changes have been associated to various human conditions including autism, this prospective cohort project (follow from birth an at-risk cohort so that the composition and function of the microbiome can be compared in the same subject before and after the onset of the disease) will test for the first time, in human clinical studies, the causality in autism by alterations in gut microbiome composition and function mechanistically linked to the onset of the disease. The project will use a combination of patient cohorts, animal models and prospective patient samples to investigate whether specific patterns of gut dysbiosis influence epigenetic modification in the host, modifies metabolic pathways, altered gut permeability and immune response and, ultimately, trigger and/or increase the severity of autism-related symptoms and related GI comorbidities. Moreover, using specific to stratify patient populations for specific interventions, the project will attempt to validate the hypothesized mechanisms of disease via the personalized correction of gut dysbiosis and the observation of whether changes in proposed disease-specific pathophysiology take place.

The year is 2025: Twelve-month old Gemma is at the doctor’s office accompanied by her mother and her 31⁄2-year old autistic brother. About a month ago, Gemma had been diagnosed with an otitis media that was successfully treated with a three-day course of a targeted oral antibiotic. Gemma’s mother reports that her otitis has been resolved, but that she now suffers from constipation and stomach-ache.

Gemma’s doctor can perform a set of recommended queries on Gemma’s whole genome sequencing, which is available for siblings of autistic children. The doctor knows that Gemma has a higher than average chance of expressing autism. He orders a gut permeability test and an immune profiling of Gemma based on a blood sample, as well as a metagenomic, metatranscriptomic and metabolomic analysis based on a stool and urine sample. While the samples are analysed in search for biomarkers known to be predictors of autism, a physical and behavioral examination on Gemma is conducted, showing satisfactory growth and all developmental milestones reached. By the end of the examination, the results of blood and stool analysis are complete. The results are worrying: they reveal that zonulin (a marker of enhanced gut permeability) appears to be elevated, that pro- inflammatory immune cells have been activated and that the gut microbiome appears unbalanced with low amounts of F. prausnitzii and a relatively high Enterobacteria count. The metatranscriptome results also suggest that the genes controlling lactate production by Lactobacilli have been downregulated, and the metabolomic analysis confirms a reduction of lactate in Gemma’s stools and an increase in urinary cresols. Based on the whole genome sequencing analysis and epigenetic changes, it is established that genes controlling an immune response have been activated. In fact, a PET scan of Gemma’s brain shows neuroinflammation. The doctor turns to his computer and performs a risk analysis using a set of multi-omic analysis algorithms for disease modelling, which reveal that the combination of Gemma’s positive biomarkers, immune profile, specific gene variants, gut microbiome and metabolome composition carries a 55-fold increased risk of developing autism within 9 months. He prescribes administration of the probiotic Lactobacillus GG (LGG) at 1010 CFU/day for three months in order to re-establish proper microbiome composition and lactate production with the aim to prevent the onset of autism-related symptoms. The mother is stunned by the science behind this personalized preventive process and tells the doctor “When we had our first child in 2018, we thought gastrointestinal conditions and autism-related symptoms were untreatable »The doctor explains: « Medical science made a huge leap when researchers funded by a European research programme called Horizon 2020 demonstrated the link between certain biomarkers and colonies in the intestinal microbiome causing the neuro-inflammation that could lead to autism . This led to restoring the gut balance with personalized probiotics, as an effective pathway to prevent autism-related symptoms, and this has been the single most important discovery in the field of autism to date. » Three months later, Gemma is back in the doctor’s office. All stool and blood analyses revealing abnormal biomarkers are back to normal, and the PET scan of the brain is now normal. Gemma will enjoy a healthy childhood. Meanwhile, Gemma’s brother also has been offered a new treatment that reduces the feedback mechanism between the body’s immune response mechanisms and some specific microbiome-derived biomarkers, acting through attenuation of the Toll-like receptor family of proteins.

Three children recruitment centers are involved to allow a global sampling based on their geographical coverage:

Authism Participants will be evaluated as ASD children or neurocompetent (no ASD) children based on the Autism Diagnostic Observation Schedule (ADOS) coupled with Toddler Module, a new diagnostic method. The ADOS Toddler evaluation will be conducted every 6 months (starting 12 months of age) and used as the primary. Participants will also be evaluated as children with gastointestinal (GI) symptoms or children without GI symptoms based on the existence of chronic irregular GI disorders that has not been present since birth.

All infants will be sampled every 6 months until 36 months for blood, urine, stools and saliva. The samples placed in a biobank so that changes over time of specific gut microbiota , metabolites , gut barrier function, immune, genetics and epigenetic profiles can be assessed over time. At each sampling time point, clinical and dietary data will be recorded. The study provides: